The child doesn’t want to sleep because of the wonderment about him. Why would one enter, of one’s own volition, that state of soft death when there is so much to absorb? The adult, in contrast, embraces the coward’s sojourn known as sleep because he realizes a consciousness-less existence — a numb, unfeeling life on ice — is in so many ways preferable to the waking one. These little tastes of the abyss ready us for the unending, unswerving one to come.

So it follows that when the human animal begins taking naps, begins looking forward to the captive embrace of suspended animation, the slide toward the grave has begun. Sleep is for those who are in on the joke and have figured out it is not funny but rather horrifying down to our decomposing bones.

And then there is Tug McGraw … 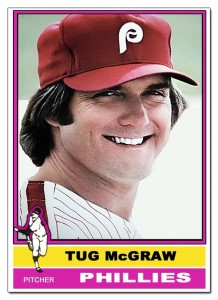 Tug McGraw had a fresh face — a face beneath his years. Tug McGraw almost certainly did not nap. Tug McGraw was like a kid out there.

(This piece originally appeared at FanGraphs. It has since been revised and made even worse, probably.)